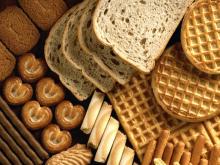 Folks who want to eat healthy by choosing whole grain foods aren't helped by product labels that can confuse and mislead consumers, a new study shows. Almost half were unable to identify the healthier whole grain option when asked to rely on food package labels, researchers discovered. A similar proportion of participants were unable to accurately state the whole grain content of different products, according to the study.

Up to half of all U.S. consumers are confused by the labeling on food products such as cereal, bread and crackers, causing them to make fewer healthy choices when shopping, according to a study published Monday by the journal Public Health Nutrition. Consumers asked to identify the healthier options based on whole grain content made the wrong choice 47% of the time for bread, up to 37% for crackers and 31% for cereal, the researchers said. 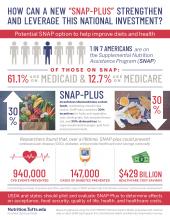 We've released a new infographic that illustrates how a SNAP-Plus program that incentivizes/disincentivizes certain foods while maintaining unrestricted choice could work for millions of recipients.

Take a look and learn more about how giving customers choice with incentives can make a big difference in both healthcare costs and overall health for individuals.

Restaurant meals make up 20% of our calories, but most are unhealthy

America's love of dining out may come with real health consequences. Restaurants of all kinds provide one out of five calories adults in the U.S. eat, but patrons are consuming food of “persistent low quality” when it comes to nutrition, researchers reported Wednesday. Half of the meals Americans ate in full-service eateries and 70% of their fast-food orders in 2015 and 2016 were of poor diet quality, according to the study published in The Journal of Nutrition.

Americans got about one in five calories from dining out, either in restaurants or fast-food joints, in the period between 2003 and 2016. And while those meals may have been convenient, fun, and even tasty, they typically weren’t very healthy, according to new research from Tufts University. At fast-food restaurants, 70 percent of the meals Americans consumed were of poor dietary quality in 2015-16, down from 75 percent in 2003-2004.

FDA Sodium Reduction Targets and the Food Industry: Are There Incentives to Reformulate?

New research, published in The Milbank Quarterly, highlights the potential health and economic impact of the United States (US) Food and Drug Administration's (FDA) proposed voluntary salt policy on workers in the US food industry. This new study examined the impact of the policy on the food industry itself to determine the cost-effectiveness of meeting these draft sodium targets. The team modelled the health and economic impact of meeting the two-year and 10-year FDA targets, from the perspective of people working in the food system itself, over 20 years, from 2017 to 2036.

Americans still eat too much processed meat and too little fish

A new study in the Journal of the Academy of Nutrition and Dietetics, published by Elsevier, found that the amount of processed meat consumed by Americans has remained unchanged in the past 18 years, nor has their intake of fish/shellfish increased.

A new modeling study estimates the number, proportion, and type of specific cancers associated with the under or overconsumption of foods and sugar-sweetened beverages among American adults. The analysis is one of the few to focus on the modifiable risk factors for cancer connected to food intake in the United States.

The Food and Drug Administration’s (FDA) mandatory added sugar labeling policy for packaged foods and beverages, set to take effect between 2020 and 2021, could be a cost-effective way to generate important health gains and cost-savings for both the healthcare system and society in the U.S., according to a new modeling study led by researchers from the Friedman School of Nutrition Science and Policy at Tufts University and the University of Liverpool. The analysis is the first to estimate the potential health and economic impacts of the new label.